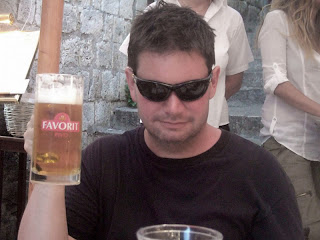 I was born in Hollywood, California. In other words, the first time I played doctor as a kid was on a neighbor's circular fur-covered waterbed with a mirror on the ceiling. The girl's parents and two younger siblings were busy out by the pool hosting a nude cocaine party.

My own parents, in contrast, were from back east, and did not partake in nude cocaine parties. I was thus instilled from a young age with a strong New England-style Puritan ethic, while at the same time being raised in what is arguably the most depraved and wantonly hedonistic neighborhood in the world. When I finally graduated high school and left to attend college in Vermont, I was completely ill-prepared for the relative lack of debauchery (i.e., the nude parties had no cocaine, and the cocaine parties had no nudity).

Portland's been pretty good to me so far, but I must admit that in the dead of a rainy winter, I'm still inclined to wax nostalgic for those carefree sunny Southern California days, and the nude cocaine parties of my youth.

Weight:   Enough to throw around.

Favorite Movie:   Without bourbon, Lost in Translation. With bourbon, The Good, the Bad, and the Ugly.

Worst Job:   HMO medical equipment denial guy (i.e., "I realize your son has no legs, sir, but I'm afraid his insurance plan doesn't cover wheelchairs. Have you considered duct-taping him to some sort of a skateboard?")

Strangest Job:   Bouncer at a bar in Chiapas, Mexico. Despite growing up in Los Angeles, my knowledge of Mexican slang is limited at best. I often resorted to waving a baseball bat in the air and screaming things like, "I throw feces at your slatternly granddaughter's chicken tamales, you obese pubic hair!"