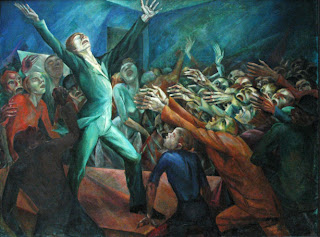 I first saw Magnus Zeller's "The Orator" at a LACMA German Expressionist exhibit back in high school. Yes, it does foreshadow--ahem--Hitler. But it also captures the flat-out awesomeness of public speaking when you're good at it. (Just click on the image to make it bigger.)

(I should also note that at least half of the small minority of the people who aren't terrified of public speaking seem to be oblivious to how others perceive them and therefore SUCK at public speaking--but do it anyway.)

The only time I managed to even stand up in front of a class and give a presentation without terror was for a few months after I returned from a college semester in Spain. The immersion exchange program I'd been on required the students to speak Spanish and only Spanish during the entire semester. Since Spaniards aren't shy about laughing in your face every time you make a slight linguistic mistake, I had become more or less desensitized to public humiliation.

However, it didn't take long before I became "re-sensitized" to the fear of public speaking.

By the time my first novel sold and my book tour loomed, I realized that not only was I terrified of public speaking, but this fear had kept me from actually doing any public speaking. Thus, I not only feared it, but sans practice, I sucked at it too.

My first step was to start going to as many author readings as I could, and see how other writers managed to do it. If you've ever attended random author readings, you won't be surprised to hear me say that most authors are actually terrible readers. First, like me, they spend most of their time writing in private, and freak out when they have to engage the public. Second, many if not most writers chose to be writers BECAUSE they felt more comfortable hiding behind a keyboard than, say, doing a stand-up routine at the local comedy club.

If I could have pulled a Pynchon and gone into hiding instead of going on the book tour, I would have. Instead, I was forced to take a rather drastic step and enroll in an improv comedy class.

[Full Disclosure: Alright, so it was all I could do not to puke before my first reading at Powell's, but it did get easier after that. And the important thing is that I now actually LOVE public speaking.]