Missing the Forest for the Fields Pt3 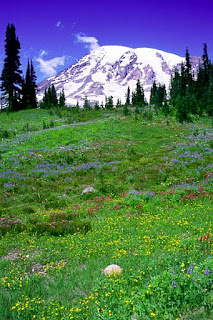 The photo is one I took of a meadow on Mt. Rainer. As part of Mt. Rainer National Park, it's protected. Although the National Park system was controversial when it was first proposed, I think that most people who visit Rainer immediately recognize that such places of spectacular beauty should be protected.

What they don't realize is how much has already been lost.

Yes, our cities and towns have blighted the landscape with their urban sprawl, but it's agriculture that has truly destroyed the natural landscape. I've read that before European settlement, the eastern United States was so densely forested that a squirrel could travel from the Atlantic to the Mississippi without ever touching the ground. Can you imagine how beautiful that must have been?

How about pre-agriculture Europe or Asia?

As Lierre Keith points out:

Ninety-eight percent of the American prairie is gone, turned into a monocrop of annual grains. Plough cropping in has destroyed 99 percent of the original humus. In fact, the disappearance of topsoil “rivals global warming as an environmental threat.” When the rainforest falls to beef, progressives are outraged, aware, ready to boycott. But our attachment to the vegetarian myth leaves us uneasy, silent, and ultimately immobilized when the culprit is wheat and the victim is the prairie.

Okay, I suspect many of you are getting annoyed with me at this point for relentlessly attacking agriculture. After all, what can we do about it? Since our global population has grown obscene and we've already destroyed the natural landscape, there's obviously no way we can go back to a hunter-gatherer existence--even if we wanted to.

My point is that our environmental and population problems are very real and very big. If we continue to ignore agriculture itself as the root agent causing these problem, all our attempts to solve them will be futile.

For instance, I just read this BBC piece on "snorkel" rice today. The headline is "Snorkel rice could feed millions," and it's about how a newly engineered type of rice could greatly increase yields in flood-prone areas.

Now at first glance, that seems like a good thing. How could feeding people be wrong?

But if we first accept that agriculture is humankind's central problem, then we have to reconsider. The history of agriculture has again and again shown that any improvement in yield results in a subsequent increase in population (i.e., more rice, more people). Most likely, snorkel rice will increase the population (not just feed people already alive) and add "millions" to our already obscenely overpopulated world.

Don't get me wrong. I don't want people to starve. But unless we take a broader view than just "it's good to feed people," all our advances in "sustainability" and agriculture are just going to add to population growth. Introducing snorkel rice without finding a way to simultaneously halt (or preferably reverse) population growth is just adding to the problem.