Missing the Forest for the Fields Pt2 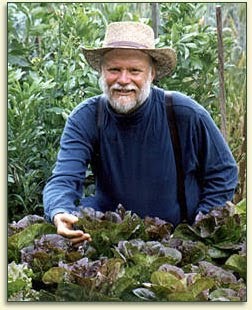 The guy in the picture is John Jeavons. His Biointensive approach to agriculture goes WAY beyond simple organic farming in terms of sustainability and efficient use of land. I also have him to thank for the bounty of vegetables I'm eating this summer from my minuscule backyard garden.

But even John Jeavons does not claim that agriculture can be 100% sustainable. Modern industrial farming depletes the land at a phenomenal rate. Top soil that took thousands of years to develop can be plowed away in less than a hundred years (and as the Dust Bowl proved, sometimes much less than a hundred years). Jeavon's techniques attempt to minimize this soil degradation and maximize the caloric content of harvests in order to feed the world's growing population.

In terms of agriculture, I feel that Jeavon's approach (despite being EXTREMELY labor-intensive) is about as good as it gets. And as I said, I use many of the techniques myself (although, in an admittedly half-assed way).

But what if we stop thinking "in terms of agriculture?"

Pre-agriculture, the topsoil of the Great Plains was not only sustainable, IT WAS ACTUALLY IMPROVING. Bison and other game populated the land "in almost unimaginable numbers" (at least according to the anthropologist Melvin Konner), living off the vegetation and, in the case of predators, other animals. Far from depleting resources in the manner of high-density feedlots, the animals fertilized the soil with their feces, urine, and (when death came) bones.

And the people who lived there? They ate both the vegetation AND the animals.

So before making the claim that eating meat is not sustainable, it's important to understand that it WAS sustainable for almost the entire history of humanity. Whereas, agriculture (conventional, organic, Biointensive, or otherwise) has NEVER been sustainable.

I suspect at this point that many of you want to counter with the argument that with seven billion people walking around, there's no way we can abandon the fields and go back to hunting bison. Well, you're right. But then again, since agriculture isn't sustainable, NEITHER IS THE CURRENT WORLD POPULATION.

If we use more Biointensive-style agriculture techniques and switch to more "calorically-efficient" vegan diets are we really going to save the environment? Or, instead, will the Biointensive/vegan approach just allow the world's population to get even bigger and thus LESS SUSTAINABLE?

Agriculture and population are inseperable issues. Agriculture is what caused the population explosion, which in turn, drives the need for more agriculture. Every time there's an "improvement" in agricultural techniques (such as the introduction of chemical fertilizers) there is a concurrent increase in population. Without the "Green Revolution," would India have ever topped a billion people?

So when people say that a grain-based diet is more sustainable than an animal-based diet, you have to ask what they're trying to "sustain." The ludicrous overpopulation of Homo sapiens that is causing catastrophic irreversible damage to the global environment?

(Continuing... In the mean time, I urge you to read the introduction to Lierre Keith's The Vegetarian Myth: Food, Justice and Sustainability. And thanks Gigi for the comment. I'm glad I haven't alienated all my vegetarian friends... at least not yet.)