How Not to Lose Weight Eating 1200 Calories a Day 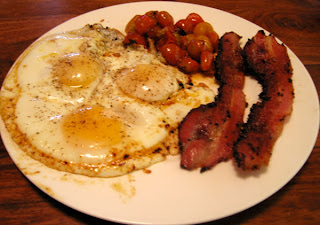 The comments I received (both on the blog and in person) on my last post "How to Lose Lose Weight Eating 5000+ Calories a Day" really shocked me. Since I was already shocked that I'd managed to lose 50 pounds eating 5000+ calories a day, I guess that leaves me doubly shocked. In fact, I'm starting to feel like the monkey in that Peter Gabriel song...

MolBachman has been eating 1250 calories a day since January. While she has lost 20 pounds, SHE'S BEEN EATING ONLY 1250 CALORIES A DAY SINCE JANUARY! And people think dieters have a lack of willpower...

Headwaste spent months eating 1200 calories a day WHILE TRAINING FOR A MARATHON and failed to lose weight. Crazy? Well apparently it's not entirely uncommon. This is from EXRX's piece on the Starvation Effect:

"A 51 year old patient complained of a 15 lb weight gain over the last year despite beginning a strenuous triathlon and marathon training program (2 hours per day, 5-6 days per week). A 3 day diet analysis estimated a daily intake of only 1000-1200 Calories."

My opinion? THAT IS INSANE!

So I went back and looked up Ancel Key's study on starvation diets in Good Calories, Bad Calories. It took place during WWII using conscientious objectors.

Subjects consumed an average of 1570 calories a day or roughly half of what they were used to consuming (they were all young men). They did lose weight, but not nearly as much as would be expected by the calories in calories out theory. They also had an incredible list of side-effects. I'll quote a few...

"Nails grew slowly, and hair fell out... Pulse rates were markedly reduced, as was the resting or basal metabolism... Reflexes slowed... They described their increasing weakness, loss of ambition, narrowing of interests, depression, irritability, and loss of libido as a pattern characteristic of 'growing old.'"

But it gets worse.

Five of the subjects succumbed to "character neurosis" (two "bordered on psychosis"). At least one of the subjects was commited to the psychiatric ward with talk of "suicide and threats of violence."

Even though there was a calorie restricted "rehabilitation diet" at the end to try and keep the subjects from gorging (during which one subject's "personality deterioration culminated in two attempts at self-mutilation"), when the subjects were finally allowed to pig-out, they ate a whopping 8000 calories a day AND WERE STILL HUNGRY DESPITE BEING PHYSICALLY UNABLE TO EAT MORE.

By the end of the "rehabilitation diet" (i.e., before they were allowed to eat whatever they wanted), the subjects had gained 5% in weight and had 50% more body fat.

Does cutting your calories to 1200 a day seem like such a good idea now?

Of course, I know damn well why people are severely cutting calories (I've done it myself in the past). Since all the advice we've ever been given on diet by the mainstream media is wrong, we've grown desperate. But since these diets MAKE YOU GAIN FAT in the long run, I really can't see why anyone should be on them.

Sadly, if you've already tried the starvation approach, your metabolism is probably a wreck and you need to find some way to jumpstart it. Jim Purdy commented:

"I've been experimenting a little with eating 5 or 6 very small meals daily, consisting only of an extremely high-fat mixture of avocado, peanut butter, pecans, walnuts, flaxseed, and olive oil."

I'm keeping my fingers crossed that this approach will help get his metabolism going again.

I personally suspect that low-carb/high-fat/high-protein along with heavy strength training is the way to go, but then again I have no real proof (that's just what I've had success with).
Posted by Jonathan Selwood at 12:59 PM